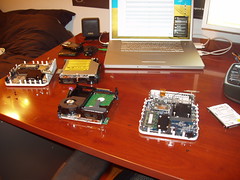 (opens new window)
After two weeks of downtime my new Mac Mini has arrived. Its an eBay purchase so the 30% discount was worth the extra week of wait.

Ended up getting the processor I wanted but opted for minimal ram, hard drive and just a dvd reader since those parts worked well on my defective mini.

First step, open it up and rip it apart. Two putty knives and some elbow grease was all it took. Next unscrew all visible screws and lay it all out. The photo shows the dissection in progress.

After all the old pieces were in I fired it up and gee golly it worked. It was like it never left the desk. The old hard drive didn’t even blink on the new motherboard and recognized everything as if it were there all along.

After twenty minutes and eight updates the system was rolling. Syncing all my files back from my laptop took another ten and we were back in business.

Now on to reactivating Time Machine, the software that froze my old mini each time it loaded. I can officially conclude the old mini was freezing due to a defective motherboard. This new mini is backing up 50 gigs of new data as I am typing without any issue.

Last but not least just for kicks I reassembled my old mini with the new parts in it just to see if it would boot. Sure enough it did and stayed on for 15 minutes before I turned it off. Just my luck, I am going to leave it on all day tomorrow just to see if it will freeze, if successful ill be selling a working mini on eBay instead of a parted out version.

I am just glad this whole ordeal is over with and I can stop thinking how much fun it would be to throw my mini against the wall.