First 24 hours with the Palm Pre 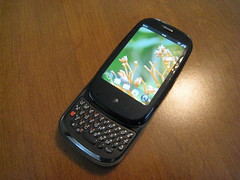 (opens new window)Let me just preface that I have owned Palm Treo devices in the past. I also love Apple and their products, I don't have an iPhone because of the AT&T lock in and ridiculous pricing structure.

When Palm announced what seems like years ago they were developing a completely new phone web based OS I got excited. I live and breath the web and know the power of web devices. Finally they announced the Palm Pre (opens new window) and it was released yesterday, June 6 2009. Of course supplies were going to be limited so getting in line early was key. The Sprint store by my house opened at 8 am and I got in line at 6. I ended up being #19 (opens new window) and there were 3 people who actually camped overnight. The store ended up having about 80 of them so I easily got one. Here is a breakdown of my first 24 hours with the Palm Pre.

Initially reading the reviews everyone said the plastic was flimsy and the phone was too light. I found none of these to be true, the phone is a great weight and doesn't feel cheap at all. The only piece that does feel flimsy is the little cover for the micro USB port. You have to open it carefully the first few times to break it in, it feels like it is going to break if you are not careful. But after a few times opening and closing it it loosens up and I feel more comfortable about it now. 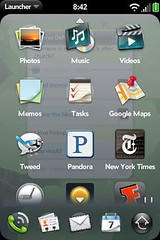 (opens new window)The Web OS is Amazing! very fast and fluid. Launching applications and switching between them takes almost no effort at all. It feels very similar to the iPhone except you can use gestures instead of always clicking the center button to move back a screen. Moving between apps and launching apps happens super fast, not sure how it compares to the iPhone but it blows the Backberry Storm out of the water.

The screen is very bright and the colors, transparencies and shadows are amazing. Its almost like when someone moves from a Windows PC to a Mac. The window placement, transitions and movement are just so fluid you don't know how you ever worked on a PC. I was scared that the feel of the screen was going to be like the Blackberry Storm, (I hate the feel of the storm screen) but its not rubbery at all, its not glass but its super solid. Very reactive and sensitive. It reacts to your fingers without effort. Only thing I could not figure out at first was how to do is take a screen shot, one thing I like that the iPhone/Tough can do in just two keys. I finally figured it out with the Orange, Sym, and P keys (kind of a hassle).

The App Catalog is limited at the current moment, I really hope Palm releases the SDK soon because it looks super easy just from the apps I have downloaded. I downloaded 6 so far and they have all been pretty good. Tweed could use some more options but it works, I am sure someone will create a better Twitter client once the SDK comes out.

The audio quality is amazing, both in the ear piece and on speaker, I think better than my Blackberry. I love that there is a full headphone jack at the top, a great position for it and the iTunes integration is awesome. The Pandora app lets you stream music right over the air (no need to be on wifi, but if wifi is enabled it will use it) and can even keep playing in the background. Something the iPhone cannot compete with.

The notification system is really cool to say the least. It comes through at the bottom of the screen with tiny icons or one line text till you touch it and all notifications expand and moves your application up a little, no need to quit your app it just keeps running. Clicking on a notification launches the app and still keeps your old app running in the background.

The battery life is good so far. It came about 40% charged and playing with it the battery was going down quick. After charging it to 100% it only went down 10% in about 4 hours. Its hard to say how good the battery life is yet, I will post an update in the next few days. 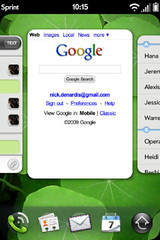 (opens new window)The browser is solid and loads pretty much any web page, zoom happens with the normal two finger actions. One thing I was disappointed by was the lack of Flash. I really hope it comes in a update soon. Updates get pushed through in the background and looks like they are going to be updating the OS often. There already is an update for Web OS to 1.0.2 and it updated without issue. The Sprint network is amazing, I was getting 358 kbit/sec with 0.215s latency data transfer. Site Used: DSL Reports Mobile Speed Test (opens new window)

The keyboard I heard form reviews was hard to type on and the keys were too small. I did not find this to be the case. The only issue I found with the keyboard layout is how close the "back" and "enter" keys are to each other. Without looking I often went to click the back button but ended up clicking the enter key. Bummer but totally possible to get use to.

The network integration is awesome. No need for the Google Sync app its all built in. The only downside is that Google Sync allows you to pick your "My Contacts" instead of "All Contacts" by default in the Pre. So it pulled in 500+ contacts and a lot of them I didn't even know I had in my book. Took me a little bit but I finally cleaned up my addresses and now all is good. Adding Facebook contacts only complicates things further, wow there is a lot of people in your phone now. I ended up removing Facebook contacts for now.

Overall the Palm Pre is a pleasure to use. It makes using a phone seem effortless and fun again. I really hope they release the SDK soon so they can get more Apps in the catalog, this will be the make or break feature for the phone. The features and positives definitely outweigh the negatives. If you are looking for something different the Pre is definitely for you, its not your run of the mill phone and hopefully will compete for some of the iPhone's market share. Competition is good and this phone will definitely keep Apple and Google on their toes.