First 48 hours with the Pixel Buds 2 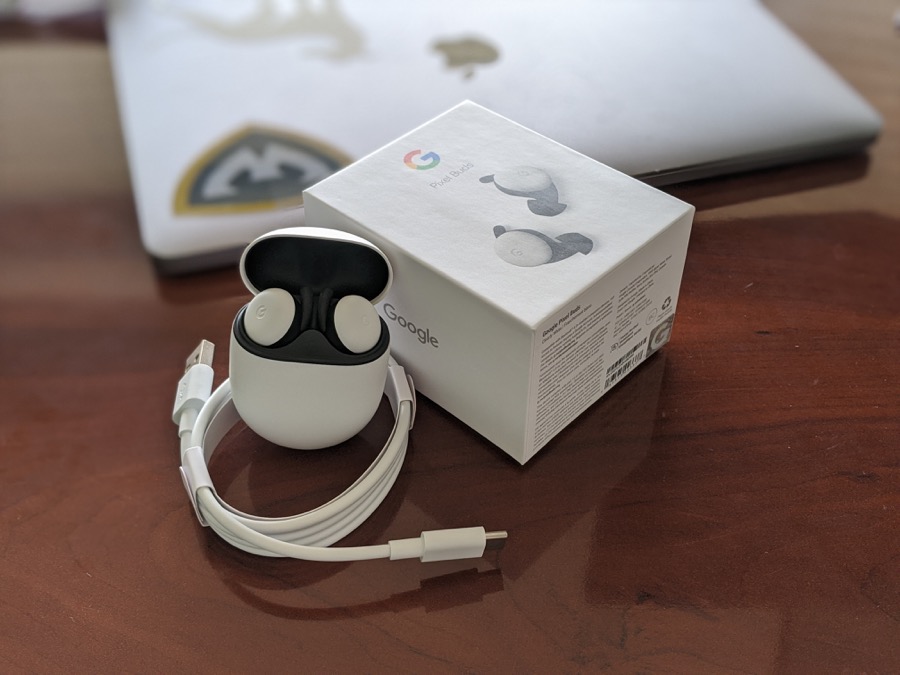 Continued at: "A typical workday with the Pixel Buds 2 (opens new window)"

Unsponsored review by an average person.

The appeal of the Pixel Buds (opens new window) came from using assistant with the USB-C earbuds, it's just so convenient. For context, I've never tried the original Pixel Buds or any other wireless headphones.

Decided on the smallest pads. The medium size seemed fine, but after having them in for more than an hour at a time, I found the smallest ones were the best mix of fit and ability to hear talking when audio is paused.

They are seriously light though, it hardly feels like there is anything in your ears.

At first, they felt pretty quiet, but after some adjusting, they seem only slightly on the quiet side. There is definitely something odd about the volume controls though. At times it felt like there were two volume controls while connected to a Mac. The output volume works like normal, but then there seems to be a separate Buds volume that is controlled through swiping. Sometimes they update in sequence, but with the Mac volume all the way up, I can still turn up the Buds by swiping until they top out. Not ideal, and probably a bug, but it may be why some people feel they are quieter than they should be.

These feel completely natural and work really well. On two occasions though while running and trying to turn the volume up it thought I long-pressed and read me the time and all my notifications. This could have been due to sweat, but it was unexpected.

To be honest these (or any in-ear headphones) are not something I would want to wear all day long. I am on calls for 3-4 hours per workday, but I haven't yet had the chance to see how long I would keep them in.

Spend the second day doing a ton of yard work and had them in ~40% of the day. Feels natural to put them back into their case when not in my ears and the longest amount of time wearing them only reduced the battery to 40%.

They come fully charged out of the box and after 48 hours the case is still at 38%. Even if I traveled a lot and wasn't able to get to a charger each night, the amount of battery seems on par for what is reasonable and I likely wouldn't spend more for a higher capacity battery.

So far so good on this front. It is nice to hear conversations around me without have to take the Buds out. While running next to a loud road the sound did turn up automatically and then back down when it got quieter. While mowing the lawn it did the same. I would say the feature is pretty helpful but found myself still adjusting the volume between podcasts and wish the adaptive sound would equalize the output audio instead of assuming all audio is already equalized.

I'm used to recording audio on my computer with a podcasting mic. This one was a bit weird for me to wrap my head around. While connected to the Pixel 3 XL and making a call outside in a windy environment the person I was talking to said I sounded normal and they couldn't hear any wind at all, which was great.

I make a lot of calls from my computer though, a 2017 Macbook Pro 13" with Touch Bar. This is where things get complicated. I tried to record the mic and got some really horrible results similar to Tech FireSide (opens new window). But realized it was only because Mac OS was doing some sort of downsampling only while recording, the actual call quality was really good.

After listening to someone else talk on them from the Mac or phone I can say the mic really is high quality and on-par with a wired microphone.

A real world test after a full work day will be telling though.

Connected to the Pixel 3 XL the connection has been great, I was able to walk a good ~30 feet away inside and ~100 feet outside with no regression in the audio quality. Connected to the Mac though I was surprised the range was only about 15 feet at best. Apparently the 2017 Macbook Pro only has Bluetooth 4.2, which severely limits the range.

When moving from the Pixel to the Mac and back and forth multiple time the speed was fantastic. Only two or so seconds to disconnect and reconnect.

Something I've struggled with is going truly voice based for all interactions. With the USB-C pixel earbuds I was able to hear all notifications and they were read to me. I could prompt this by holding the mic button and it would read the time and then all unread messages.

Without the cord and with my hands dirty I'm looking for a way to do the same but with only my voice. I've tried the recommended “read my messages” with mixed results. I have checked my app notification settings and all the relevant ones are on.

I still haven't found a consistent voice command to have Google read me all my unread notifications without touching the physical buds.

It took a few times of taking the Buds in and out of their case and then leaving them alone for them to update then report their new version. There was no audible sound or notification to let me know they were being updated or that the update was complete.

I have not experienced hissing when connected to the Pixel 3XL, even when listening to audio at the lowest volume. As soon as they are paired with the Macbook Pro though there is a noticeable hiss when in-between apps/music but it seems to silence itself after a second or two. Definitely not noticeable or a dealbreaker and feels like it is coming from the computer instead of the Buds.

The first two days have been wonderful. I don't have a lot of context to other wireless headphones but compared to the wired ones I'm used to the Pixel Buds are great. I've found myself leaving them in my ears more than their wired counterparts.

I mostly listen to books and podcasts but the overall sound quality is great although if I really wanted to listen to rich music I would opt for over the ear headphones any day.

For me, the largest sell is the ability to access the Assistant and everything on my phone with voice.

Next in the series: "A typical workday with the Pixel Buds 2 (opens new window)"